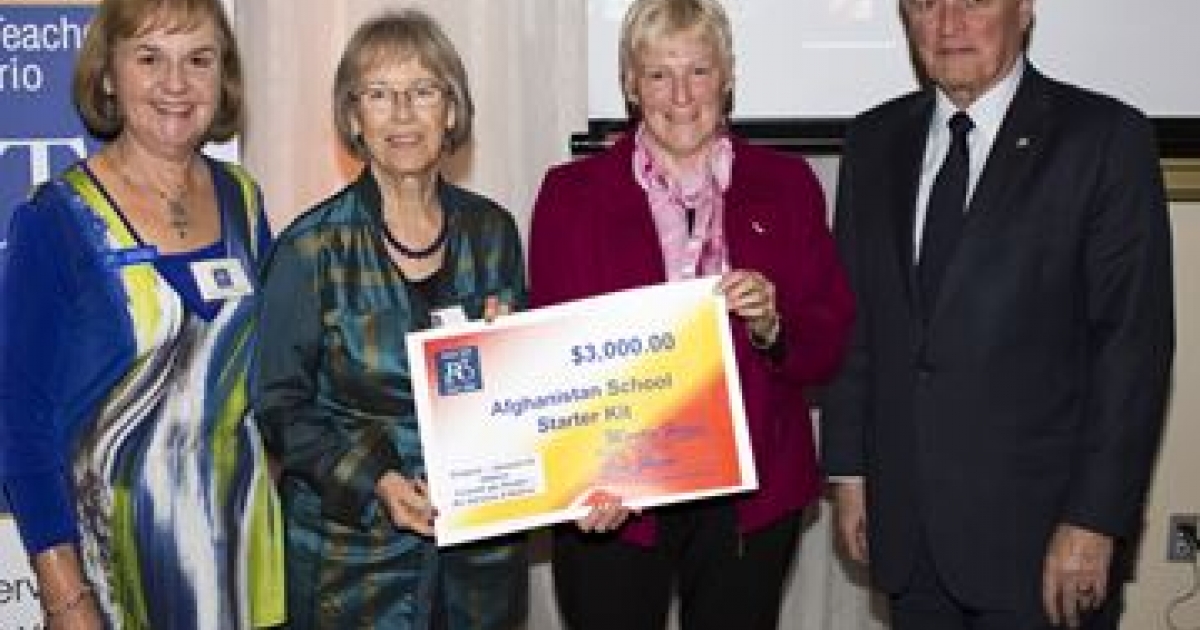 May 16th, 2019—Oakville, Ontario—Canadian Women for Women Afghanistan (CW4WAfghan) Halton Chapter members will celebrate 20 years of championing the rights of Afghan girls and women at a celebration May 16th at 5:30 pm at the Joshua Creek Heritage Arts Centre.

In 1998 a group of women in Oakville read an article by activist Sally Armstrong about the plight of women and children in Afghanistan when the Taliban came to power, and vowed to raise $1,000 over the next year to support their Afghan sisters. Twenty years later—and $800,000 in charitable dollars raised—they celebrate the tremendous strides made for women’s education in Afghanistan and remain galvanized to action in the face of fear that girls and women will once again suffer under the guise of a negotiated peace settlement with the Taliban.

Says Bev LeFrancois, Chapter founding member, “In one day all those years ago, the Taliban decreed that women could not work outside their home, go to school or be seen outside without a male relative. They were ordered to paint their windows so no one could see them. Outside, they had to be completely covered with a burka; morality police would whip them in the streets if a wrist or ankle were exposed. Their bones were softening from lack of sun. The women of Afghanistan were dying just because they were women. Members of the Oakville Sexual Assault and Violence Intervention Services (SAVIS) called this gender apartheid, and we had to act. We established Canadians in Support of Afghan Women (CSAW), which later became CW4WAfghan Halton.”

Says Murwarid Ziayee, CW4WAfghan Senior Director, “These outstanding women have partnered with Afghan women to open so many doors. They have strengthened a national movement dedicated to restoring the rights of girls to attend school, to give adult women literacy classes, to provide much needed resources like libraries for schools, and so much more! As Afghan women sit at the edge of a crushing slide backward, we already know what kind of life—no life at all—awaits them in an Afghanistan should the Taliban yield power. But we persevere and we gain strength and hope through the unstoppable efforts of our sisters in Canada, as exemplified by the solidarity of these dedicated women in Halton.”

Media representatives are invited May 16th to hear more from special guest Murwarid Ziayee about the current situation in Afghanistan and the work of CW4WAfghan. To arrange an onsite or pre-event interview with Bev LeFrancois or Murwarid Ziayee, please contact Christine at community@cw4wafghan.ca or 519-933-9453.

Read CW4WAfghan’s call to COMMIT TO THE PROTECTION OF WOMEN'S RIGHTS IN AFGHANISTAN - Statement on Taliban Negotiations.

CW4WAfghan is a member-based, not-for-profit founded in 1998 to advance education for Afghan women and their families, and to educate Canadians about human rights. In Canada 2000 members demonstrate their commitment as global citizens by supporting CW4WAfghan. In Afghanistan we support a dynamic team of Afghan professionals who implement education programs in Afghanistan. We believe that individuals, as global citizens, working in solidarity and with integrity of purpose and action, can affect positive change in the world through education and the promotion of social justice and human rights. www.CW4WAfghan.ca